The day will come when I will die. So the only matter of consequence before me is what I will do with my allotted time. I can remain on shore, paralyzed with fear, or I can raise my sails and dip and soar in the breeze.--Richard Bode

It's been an interesting week of riding since my last post. There has been little time and less incentive to contribute to my blog, so I have some catching up to do---------- 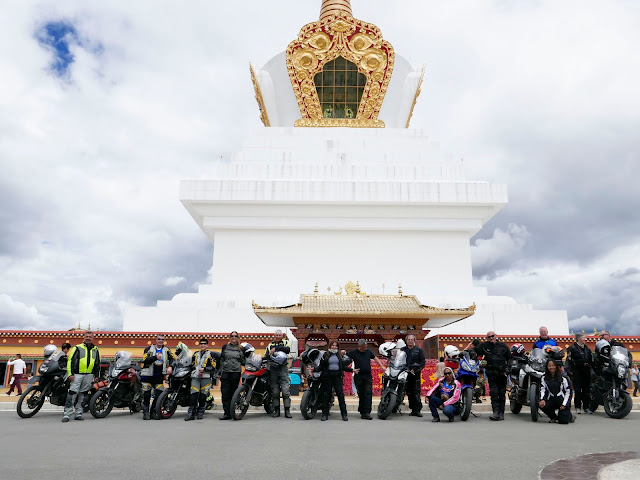 Our group consists of 10 motorcycle riders: three from Australia, two from Thailand, one from China (our guide), one from the USA (that's me), one from Taiwan, one from the Canary Islands, and one from Colombia. There are also several women riding on the back of the motorcycles: one from Colombia, two from Australia, one from Thailand, one from Taiwan, and my own Jessica who lives in Holland. We also have one support vehicle, a van, which carries our luggage. It is driven by a nice man from China.  As you can see, we are quite a diverse group. 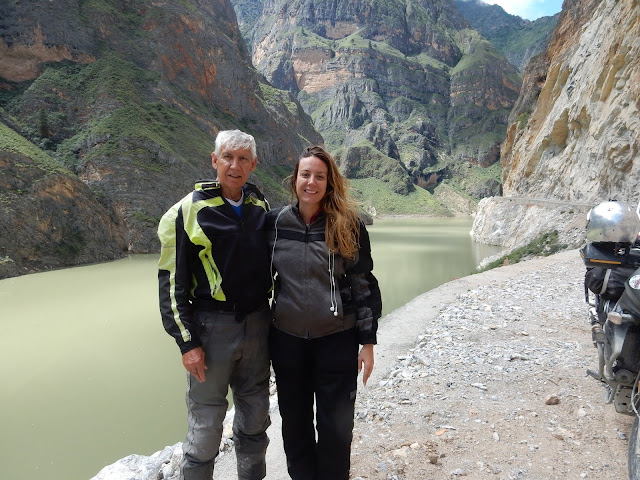 Here  are Jessica and me stopped for a quick photo at the Yangtze River. 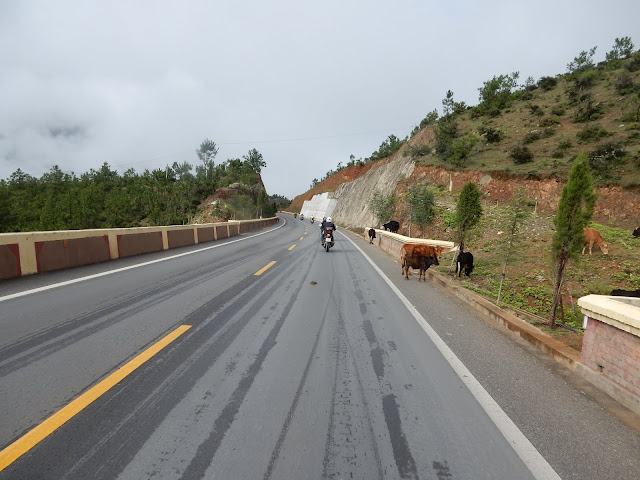 For the most part, the roads have been fast and smooth. You do have to be very careful of the stray cows, yaks, walkers, lorries, slow drivers, and other such obstacles. Jessica and I came within a whisker of hitting a calf that took a sudden notion to dart across the road. Our throwing on the brakes saved her; she was able to join her mamma safely. 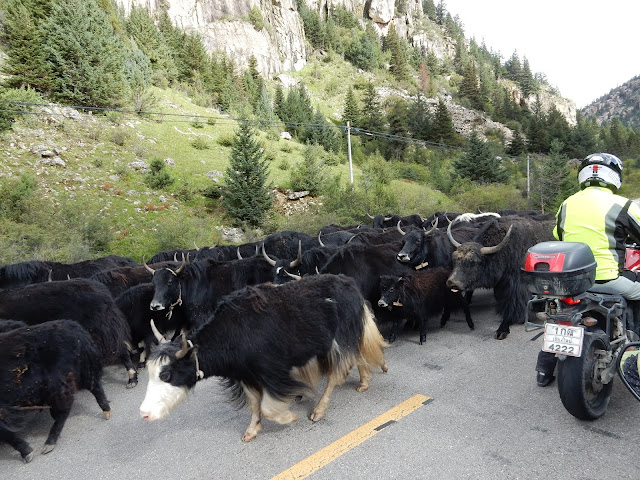 The towns have been large, and getting through traffic has been a challenge. It takes a lot of lane splitting and aggressive riding to negotiate 10 motorcycles through traffic. 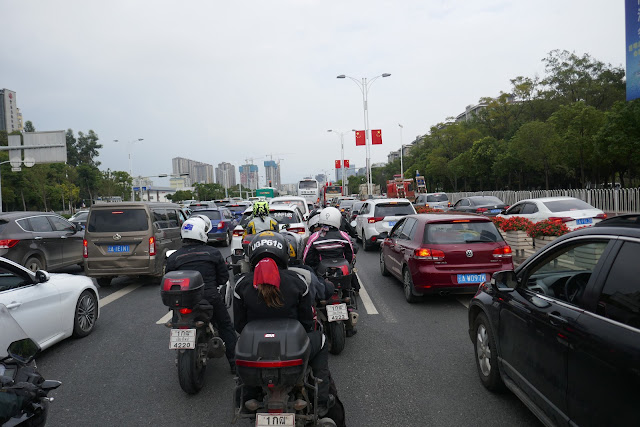 I have been very impressed with cities in China. Although most of them seem very large, they almost always have a well preserved "Old City".  Sometimes our hotel was in the old city, and we usually had time to walk around and enjoy the shops and people. 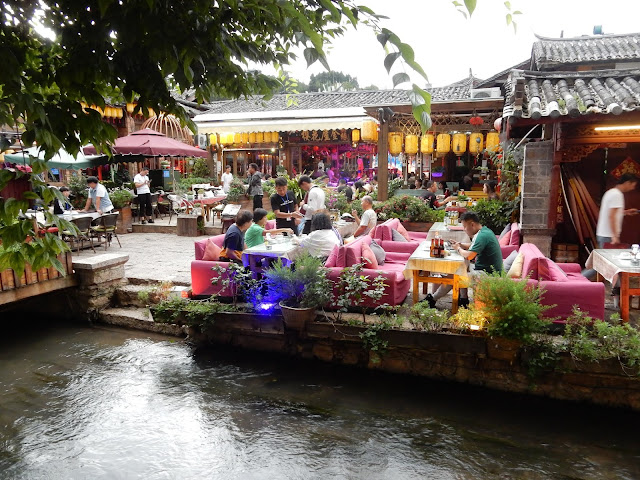 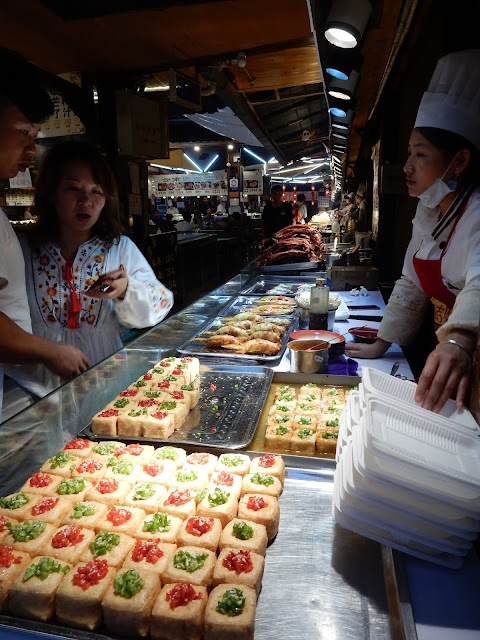 Every evening people came out to exercise by dancing. These were normally women, but sometimes the men joined in. 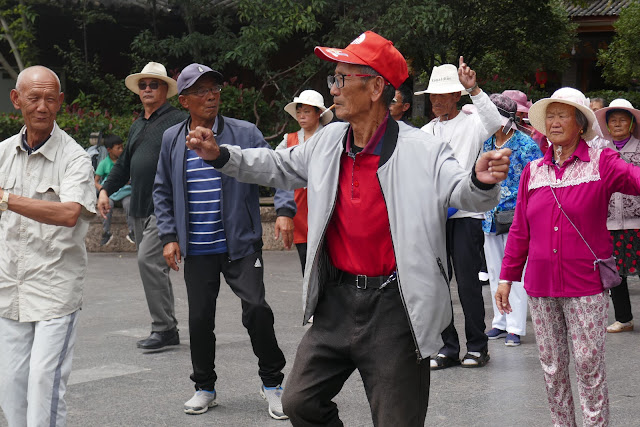 Usually the roads were excellent, but on our first day riding up through the mountains toward Tibet, there had been so much rain that the road had been buried in landslides so that some of the routes we wanted to take had been closed to all traffic. 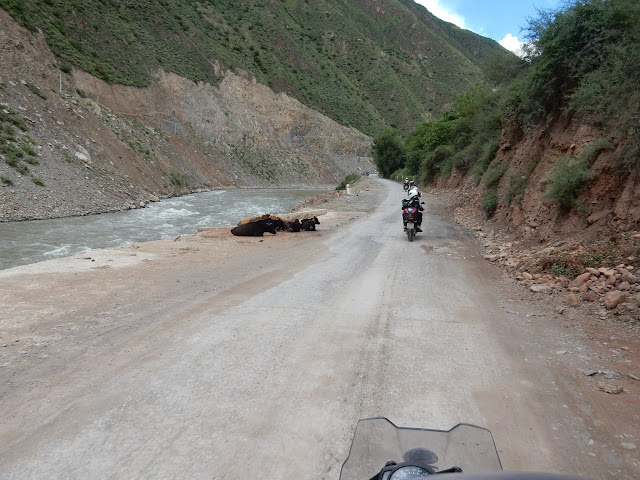 At one spot, we were the first in line at a landslide that had just happened. When the road finally opened, the women decided to walk through while we men slip-slided our motorcycles through. The women were smart. Here, daughter Jessica took my picture when it came my turn. It was quite difficult to negotiate the road, I can tell you. 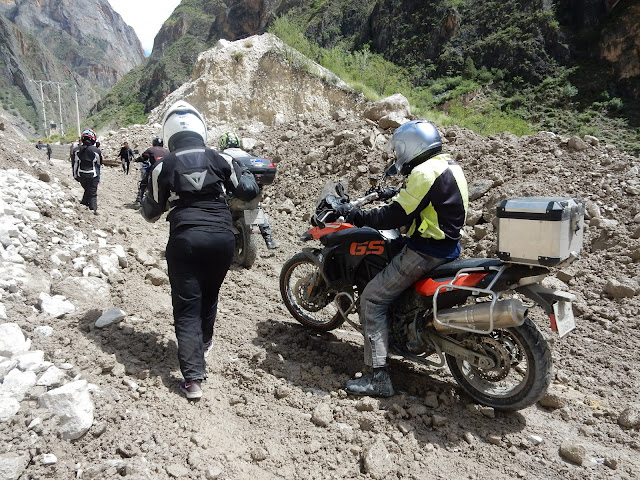 We have been riding higher and higher into the mountains of Tibet. You can see glaciers on the distant mountains, and prayer flags just behind Jessica. 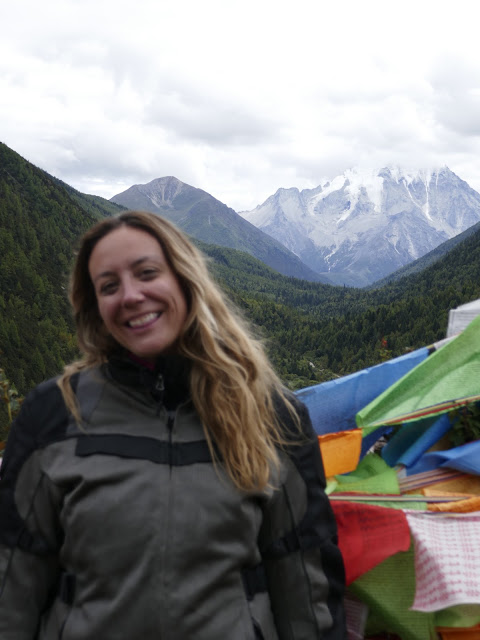 Buddhism is the main religion up here in Tibet, and there are many monasteries. The monks, like all the people, are very friendly. Can you see the monk in the center getting his picture taken with us? He loved it. 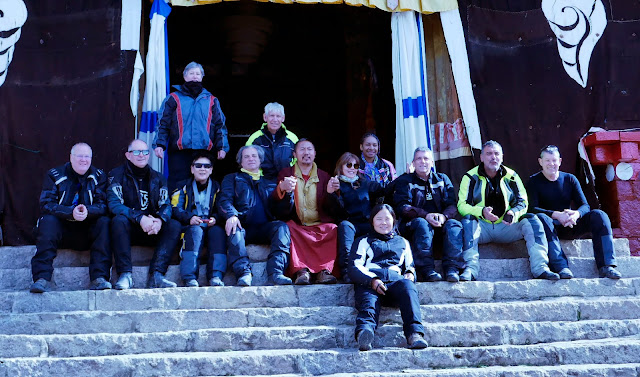 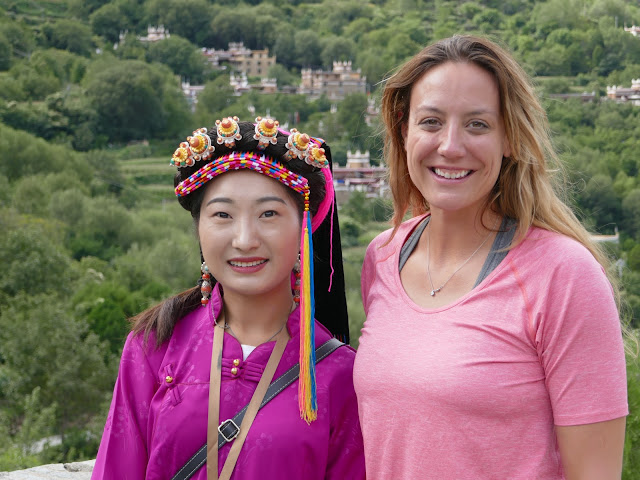 It has been a long day, but a very fine one. Goodnight for now.

After staying around home for a year or two, trying to give my wife the limited amount of support I could as she dealt with her mother's failing health, I took a trip with my son, daughter-in-law, and a couple of my granddaughters to visit my daughter Jessica in Holland. Following that, I spent another year at home trying my best to give aid and comfort to my wife, Patrice, who continued to deal with her mother's health and finances. And then, in the summer of 2019, an opportunity came up where I could go by motorcycle from Thailand to Beijing, China. Patrice, the most supportive wife a man could ask for, encouraged me to do the trip. 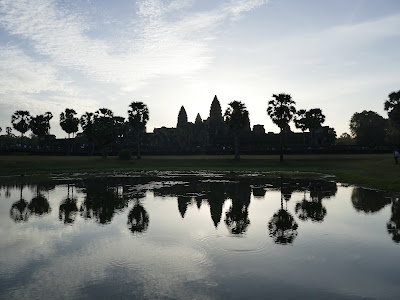 I built enough time into my agenda so that I could visit some of the tourist "must do" sites in Southeast Asia. The picture above is the famous temple of Angkor Wat. Apparently the thing to do is catch the sunrise behind the temple, and get the reflections in the moat. 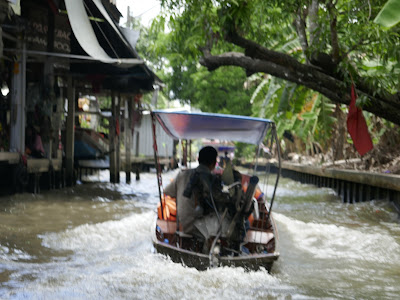 Exploring the floating markets is another thing that I enjoyed. 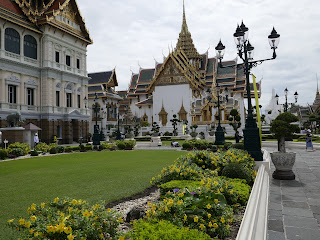 It would be too lengthy to post pictures of all the places I went to in Cambodia and Thailand, but the one above is the king's home in Bangkok. 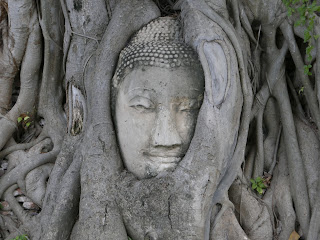 Some of the ancient palaces and temples around Bangkok are so old, the trees have grown around the statues. 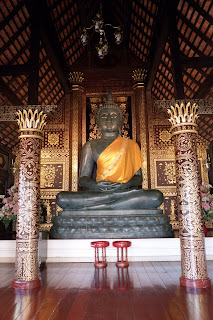 The Buddha seems to be everywhere. Here, he is seated on a snake. There is quite a story associated with that image. I learned that the Buddha is mostly shown in one of five or so poses. The Buddha image above, with his hands folded, is the contemplative Buddha. 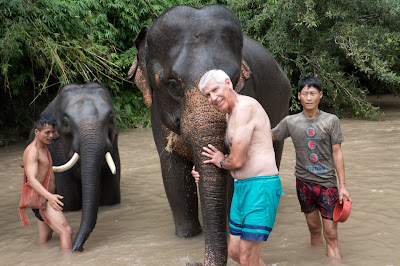 There are both wild and tame elephants all through southeast Asia. They are very peaceful and intelligent animals, and they very much enjoy a bath in the river. 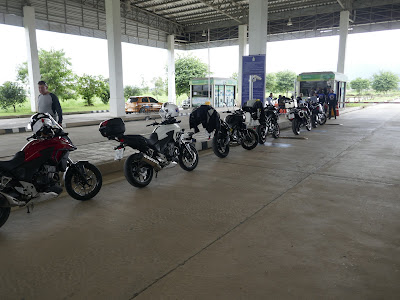 After I had explored Cambodia and Thailand for several weeks, the other people going on our trip started arriving. We gathered in a town named Chiang Rai, and then went by van to the northern Thai city of Chiang Kong where we got our motorcycles. Mine will be a bmw, We will have 9 motorcycles, one support vehicle to carry our luggage, a small trailer that can carry a motorcycle in case of a breakdown, and 5 women riding along on the bikes. My daughter, Jessica, will be one of them. 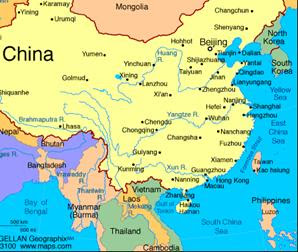 After getting all sorted out, we spent the first night together in a beautiful hotel on the banks of the Mekong River. On the other side of the river we could see the lights of Laos. The next day was a long one of dealing with custom agents going from Thailand into Laos, and then from Laos into China. It required visas in our passports, money exchanging hands, special driver/s licenses (China won't give a motorcycle license to anyone over 55, which we all are. During all this, I had my 76th birthday, making me the old man of the group. 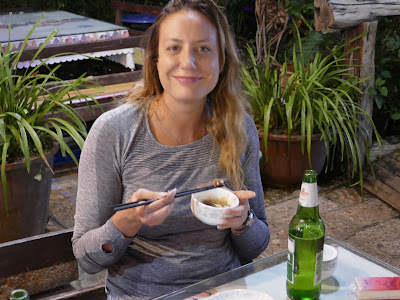 I think Jessica is the youngest, although I could be mistaken about that. Two other women in our group is about her age. 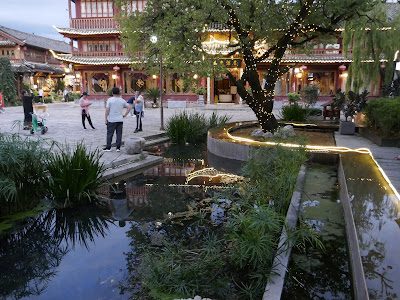 China is a clean, modern, beautiful country. If there is a drawback, it would be dealing with traffic in large cities. Now, though, after three days of hard driving, we are in the old city of Lijiang. It is a delightful place. We had a marvelous time looking around last night, and today is a "free day? to relax and explore. 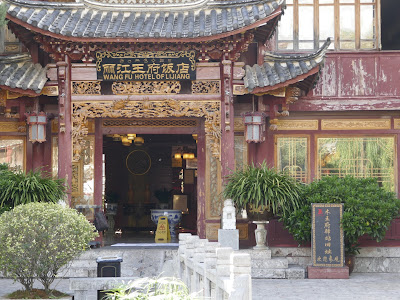 This is our hotel. Now, after a good sleep late morning, it is time for us to go down, get breakfast, and find out what this city has to offer. So, talk with you later.

Why is my motorcycle named Odysseus?